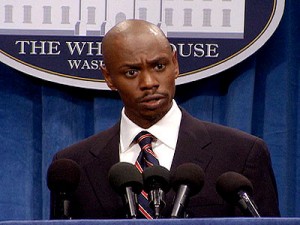 Growing up as I did, going to predominantly upper middle-class white schools, I’m no stranger to being treated like the representative for the “Black perspective.” This happened quite often during cultural discussions in high school and even collegiate classes, when I was asked to weigh in on something that had to do with something or someone in African American culture, simply because I am an African American.

I thought I had escaped this sort of enlightened racism, until recently when I was approached by a fellow regular at the local coffee shop.

“I hate to put you on the spot…” the gentleman said. “But I gotta ask: What do you think about Herman Cain.”

Personally, I don’t spend much time thinking about Herman Cain. But just a few days earlier, I had listened to an episode of Rachael Maddow where she made a compelling argument for Cain as political satire.

I chuckled though, and responded, “I think he’s a joke, pretending to run for presendent as a PR campaign for his new book.”

“Oh?” I could see the wheels grinding, the man was trying to process what I had said. “Why do you think that?”

I explained that Cain had made references to “the great poet” Pokemon and his 9-9-9 tax plan was something out of a video game. His campaign didn’t make sense to me and, as far as I was concerned, Cain was no more likely to run for president than Donald Trump.

In one ear and out the other.

“Y’know, I like him,” the gentleman said. And then he launched into a rambling tyrade of Republican talking points, why he liked or disliked various Blacks in politics and his experience with “minorities” from his military days.

While some might have engaged the man further, I decided it best to just let him get this out of his system. He hadn’t even really listened to what I said and if he had, it was clear, he really didn’t care. He wanted to have a discussion about Black things with a Black person, and I was the only one he knew.

But he didn’t want to talk. He wanted me to listen. And he couldn’t understand why I didn’t agree that these black politicians were so great…even though the only ones I knew of were President Obama and Herman Cain.

Don’t get me wrong, I don’t believe the man is a racist. We had had small conversations about various things in our visits to the coffee shop. But I was reminded that while most of us are unaware of our prejudices, we are far from being a “post racial” society.

Yes, I’m Black. I’m also American. I live about as far from the epicenter of Black culture in California as one can get, being behind the “Orange Curtain.” And yet, somehow, this man thought I was the authority on all things African American.

The problem as I see it, is that as a society, the US is still very much a segregated nation — and no one wants to talk about it. The result is racist behavior born of ignorance. And people of color being treated like a novelty as opposed to regular citizens of a multicultural nation.