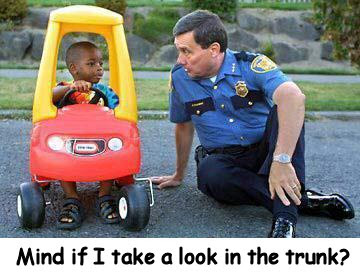 It happened again…Quite possibly the biggest fear of any free-range parent: Someone called the police about my son being unsupervised.

This time the call came from someone who had my address, and probably, one of my neighbors.

Unlike the previous run in with the police, the officer did not yell or automatically jump to the conclusion that I was a bad mother. He didn’t assume that because my son was playing at the park, I was negligent.

Instead, he noted that my being home was an indication of supervision and simply asked if my son had a habit of getting into trouble. “Is he responsible? Can you trust him to be where he says he’s going to be?”

And then we both stood there for a moment looking puzzled.

“Someone gave you my address?” I asked.

“Yes,” he responded. “I don’t know how long the call has been in the system, but someone reported that you regularly leave your 9-year-old son alone and unsupervised.” He paused for a moment. “It sounds to me like you’re doing alright. And obviously, he’s not unsupervised if you’re home.”

While I was heartbroken thinking that one of my neighbors might have sent the police to my home, I was encouraged by the officer’s lack of concern. He was kind and assured me that “this stops with me,” and that CPS had not been alerted. He was just investigating a call. He asked a few more questions, thanked me for my time and went on his way.

But I was frazzled by the visit. Again my mind wondered if I had done anything wrong. I began trying to figure out which neighbor or community member might have made the call and why. Was it time for another move? This time with the goal of landing in a more kid friendly community? (Later I realized that this was probably a hangover from the last police visit and the officer probably hadn’t been completely forthcoming in that regard.)

I waited a few minutes and then headed to the park to check on the boy, who was already on his way home. As we hit the stairs, one of the kids from our community ran up and noted that the police had been here. Was everything alright? I told her things were fine, as the boy and I made our way to our apartment silently.

“Why were the police here?” The boy asked once we were inside.

“They said someone made a call about you being unsupervised.”

He was livid. “Again?!? What is wrong with people?!” He said throwing his helmet on the couch. “I’m a big kid now!”

“I know, honey…” I didn’t really know what else to say. I was still processing the whole thing myself. I was afraid, but didn’t want him to be. How could I teach him not to be afraid of the community if I was afraid?

In that moment, I knew I had to reassure both of us that we were doing the right thing. “No. We will not be afraid and we have not done anything wrong.”

“But what if this happens again?”

I could tell that he was just as shaken as I and for a couple days, he didn’t ask to go to the park.

Thankfully, the fear didn’t last long and yesterday, he asked if he could go visit his friends near the big park. Still nervous about the visit from the police, I decided to escort him. And once he had successfully found a friend’s house at which to play, he quickly waved me away.

I left trying to ignore the nagging feeling, but knew he would make his way home on his own just fine.