He went to the park without me. I checked on him. He didn’t need me 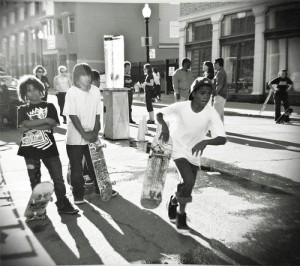 Last year the Boy and I celebrated a play holiday created by Free-Range Kids author Lenore Skenazy: Take Your Kids to the Park and Leave Them There. We biked to the park and I left him at the playground while I rode the bike trails. I was nervous at first, but when I came back 30 minutes later, he had made a new friend.

This Saturday was Take Your Kids to the Park and Leave Them There Day, but we didn’t celebrate. Well…not in any official way. You see, in the year since the one we did celebrate, it has become commonplace for the boy to go to the park on his own and hang out with the other kids…mostly boys. So today was really a regular Saturday for us.

I suppose the real difference is that we’ve learned a lot since then. We’ve learned that while most folks are free-range friendly, there are those who don’t agree with the free-range philosophy. As a result, I pulled back a little, and the Boy hadn’t been able to visit some of his friends at the skate park/community center near our house. Sure there was the school park a block away, but the the Boy was beginning to miss his friends from other other park.

I had worried. Maybe a half a mile was too far. Maybe the big intersection he had to cross to get to the “big park” was too busy for him to cross without my supervision. Honestly, I was more worried about what people would think and do about my son being unsupervised than I was about him being hurt by a stranger, hit by a car or doing something dangerous.

But he wore me down and I started letting him go back to the big park. First for only an hour. Then for two. Then one day he called and said one of his friends was having a party, could he stay? And when I went over to check on him, he was playing with all the kids he had met during our first summer in this neighborhood.

All of this lead to today, when he begged me if he could go to the big park and despite my fear, I let him go with a warning to be careful and call me if he decided to hang out at a friend’s house. Which he did. And later, he called me again to let me know he was at the skate park. I thanked him for checking in, hung up the phone and geared up for a surprise check-up. (I find doing this keeps him honest, he never knows when I’m going to pop up and if I can’t find him where he said he’ll be, he’ll lose some of his precious freedom.)

When I got to the park, he was there, happily surrounded by other skater boys, practicing tricks. I stayed back and watched because I didn’t want to break his focus. It was awesome to see him out there with the other boys, all of them so focused on landing whatever jump or grind they were working to perfect. He fell down many times, as skaters often do, and I resisted the urge to rush to his aid.

The boy didn’t need me. Now isn’t that what being free-range is all about? So I left him. And it was just another Saturday.

Did you take your kids to the park and leave them there this weekend?