The new battle for civil rights

It was the day the government almost shut down and Trump was on MSNBC’s Today using the theory that President Obama was not a citizen as a ploy for ratings.

And I thought about this thread I keep hearing in the political code, about America being for “real Americans” and working to make American the great nation it once was. 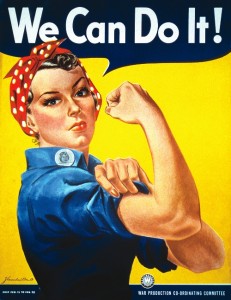 Do we really want to go backwards, returning to a time of inequality for women and people of color? It wasn’t until the Civil Rights Act of 1964 that schools were desegregated (though one could argue that schools are still segregated, but by economics rather than race), and gender became a protected class under the law. The first Black American, and a woman, Shirley Chisolm ran for President in 1972 and in 1981 the first woman was appointed to the Supreme Court.

As many Civil Rights scholars will point out, civil rights and women’s rights are and have always been inextricably linked. And it is clear that women are being targeted with both the attack on labor unions (which exempted the male dominated industries such as fire and police), and in the current backlash against women’s health and reproductive rights.

What of all the people who immigrate to the US thinking of the Statue of Liberty’s declaration to bring the cold, tired, hungry and huddled masses yearning to breathe free?

Is it that the United States of America is no longer the land of infinite possibility and opportunity?

I cried because it became very clear to me that there really are people who are enemies to my liberty and wish to reverse many of the things that make this country so great. People who would disparage the first black President with implications that his blackness makes him less American than his predecessors. People who would rather pit working people against each other, while they deny us the right to equal protection under the law.

And all I can do is hold on to my deep and enduring hope and trust in the human spirit. Just as I was raised with the knowledge that people fought for the rights I enjoy today, my generation is being challenged to a new civil rights battle. Who knows how the battle will play out, but I know that I am read to do my part to fight for my freedom and the freedom of future generations.