For most of my life I was content to be invisible. While my younger sister was a fearless social butterfly, I was often content to sit inside reading a book. I made friends with people with huge personalities and let them be the center of attention. Even when I got married, I downplayed my accomplishments and felt bad that I was accomplishing, while he complained about his sacrifice.

I thought that being invisible was my strength. That it meant I was humble and gracious. Instead, it was me being afraid to be myself and speak my truth.

And then I realized that if I wanted people to see my value, I had to stop hiding behind the fear; the fear of actually achieving my greatness.

In fact, its the same thing most people are afraid of: their own success. From childhood, we’re discouraged from standing out — either by peer pressure or because our parents impose their style on us. How many of us were the weirdos and misfits and nerds, all because we were different from everyone else? Our society pretends to value conformity, while those who achieve true greatness are the self-reliant. 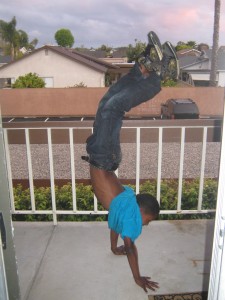 So when the Boy told me that his friend didn’t want to be his friend anymore because the Boy was showing off when he did handstands, rapping and dancing, I was a little saddened. I wanted to encourage the boy to work it out, tell him to be considerate of the other kid’s concerns. I understand that I am raising a confident, fearless, stylish and gregarious kid. I also understood that this friend was unhappy that the Boy could do things he couldn’t, and he was probably a little jealous.

So I told the Boy that anyone who couldn’t accept and appreciate him for who he was, who would tell him he should stop dancing, jumping and singing — all some of the Boy’s favorite activities — was not someone he needed to be friends with. Hopefully the other kid will get over it and find his own light within. Until then, the Boy will have to look for kids as confident as he is and comfortable with him being himself.

I want the Boy to know that its ok to be himself and to like who he is. I like who he’s becoming and I’m proud to say that I’m raising an interesting person, and not just “some kid.”