Proof that Dispite All Our Progress, Racism is Not Dead

Most people who really know me, know that I highly tolerant and accepting even. I used to be militant and wear my blackness on my sleeve. This was a result of being accused by my black peers of “talking like a white girl,” and feeling like I always had to prove I was black enough. I know it sounds silly, but where I grew up proper English was a black kid’s kryptonite and so I just got used to either being alone and eventually building a multicultural group of friends.

But back to my point, I was terribly disappointed to find out a picture sent out by a local mayor, depicting the lawn of the White House as a watermelon patch. Are you fucking kidding me?! How is this appropriate in any way shape or form?

I’ll let you decide for yourself and even if you think I’m wrong you are more than welcome to let me know in the comments: 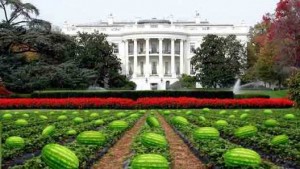 I was disturbed to find that there are actually people who really do not to get why one might be offended by this image. They say those of us who are offended are looking for reasons to be so. Just for the record, there is historical context and reason for the offending in this case. What with our new African American president, the caricatures of the black minstrel with the big pink lips eating watermelon…Seriously? There’s no reason to be upset or be disappointed in a public official who circulates something like that around his office?

There is actually a term for people who think racism is dead: enlightened racist. Yes, I know its harsh and I’d hate to think any of my friends (virtual or otherwise) are racists, but the fact is that’s what you are, if you can completely ignore racism and accuse the target of overreacting…sigh

Like I said, I don’t look for reasons to be offended. I was actually more bothered by the defense than the actual image itself. By the fact that people said that it should just be ignored. By this standard, this racist mayor would have been allowed to stay in office and that city would have reverted back to 40 years ago.

Seriously, 40 years is not that long folks…my grandmother was only a teen-ager during the desegregation civil rights movement. Her grand parents had been slaves and like so many African Americans, we have no way to trace our ancestry because we don’t know where we come from. Obviously we have made huge progress between then and now, so I don’t want to harp on the negative history. At the same time, the dismissive attitudes can take their toll.

Fine, don’t be offended. But don’t tell me I should just get over it, or ignore it. Don’t pretend that it can’t be racist because there are no racists anymore. Its not true and it makes you seem even more racist and ignorant than the person who created the image or circulated it. You, dear enlightened racist, are a barrier to progress with your turning a blind eye and denier syndrome. Racism is still very real and depicting the white house – currently inhabited by our first black president – is proof that as far as we have come, we still have a long way to go.