The Battle is On 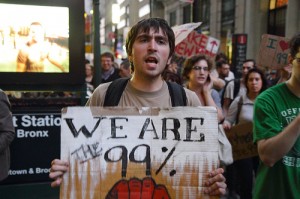 Not so long ago, I shared my feelings of despair about watching the American Dream being dismantled and the new battle for civil rights. Recently though, this despair has turned into hope as the nation has been swept by Occupy Wall Street and other aligned acts of civil disobedience.

It would seem that the working class people of the United States are starting to wake up out of their complacent consumer daze. Where at first the media treated the story as if it was non-existent, they later began dismissing the protests with “what do they want” spin.

But as police violence has erupted in the New York epicenter of the Occupy Wall Street movement and the media worked to spin the protests as the act of the “entitlement generation” and without direction, the movement continued to grow. It grew from one small group in New York (who has been there for nearly a month), to groups in Boston, Chicago, Los Angeles, San Francisco and talks of more in cities across the country.

Indeed it is time for all of us to recall the sacrifices made by previous generations who fought for civil rights and freedom before, the sacrifices being made now, and what our own contributions will be to this grass-roots movement for change.

Yes, watching the videos of the police pepper spraying protesters and beating them with batons is scary. The threat of being arrested for standing up against injustice is scary. But being afraid is part of what has gotten us where we are to day and not standing is simply providing consent.

Standing in the face of such violent opposition may well be the only way to get the attention of those in power — the people who are elected to serve and represent the people — and remind them that we will not stand by and watch the republic be ruined by greed. We the people, must stand, and remind our government who it is truly accountable to.

Are you ready to stand?