A Lesson in Empathy for the Boy 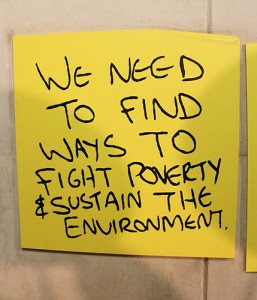 During the day, I usually don’t turn on the TV. I find it a noisy distraction. The Boy often comes home and after completing his homework, wants to turn on the tube, but I refuse.

It isn’t until after we’ve had dinner that, I go to my room and leave the Boy to get his cartoon fix before going to bed. But last night he came to me and asked if he could watch TV together instead of separate. I was watching The Constant Gardener and hadn’t seen anything in it so far that I thought inappropriate, so I continued to watch it.

After watching for about 15 minutes, the Boy turned his head and said he couldn’t watch the movie anymore. It was disturbing.

I was surprised. There had been very little foul language, no violence or no sexual content. Just a privileged white couple that was becoming increasingly fractured over the wife’s desire to help the impoverished people in an African country.

But I stopped the movie anyway and realized that the Boy was crying.

“What’s wrong honey? What were you disturbed by?”

He shook his head as the tears slowly made their way down his cheeks.

There it was, he was disturbed by the depiction of the poverty. The 15-year-old mother of three, who was dying (probably of AIDS) had been just too much for him to handle. And while I realized that he was not yet mature enough for this particular movie, he was mature enough for a little talk about empathy — because that’s what he was feeling.

So I told him that while sometimes we have had some financial struggles, we are very fortunate. We have food, we have shelter, we have nice clothes, and clean water to drink and bathe with. But there are people in other parts of the world who sleep on dirt floors and drink the same water other people shit in. There are people who don’t have the privileged of attending public schools and for many of the children in third world countries, the lunch they get at school is their only meal of the day.

I held him close and told him that his empathy was a good thing. People who feel empathy are often compelled to help others. Empathy drives people to make it so that people don’t have to drink shitty water, eat rice mush and sleep on dirt floors. Empathy drives people to work to make it so that 15-year-olds don’t have to die of AIDS.

He nodded his understanding as I wiped away his tears and gave him a big hug.

And then I put on Kick-Ass, a movie with gratuitous violence and foul language, but one that I knew would not leave him feeling sad about the human condition. There will be enough for that when he gets older.