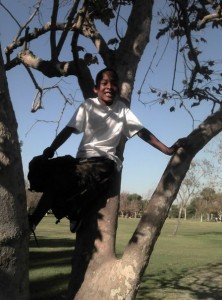 That’s what the commercial said.

I didn’t actually hear it. The Boy was listening to the TV with his headphones on.

“It said ‘an hour of exercise a day and a balanced diet can keep you skinny and healthy,'” he said removing the headphones and looking at the TV quizzically.

And then he did a mini rant about exercising but not just to do it for 60 minutes, but because he’s always outside playing.

I just let the smile growing across my face (how can I not be a proud mama when my kid says something so innocently insightful?) and nodded my approval of his assessment.

But I’m still bothered by the fact that the healthy diet and exercise PSA was selling skinny, rather than health and fun in the sun. Which brings me to the deep feeling of sadness I have when I look around safe neighborhoods and see not a single kid outside playing. And yet, there are commercials telling kids they can be skinny if they exercise for an hour a day.

As the Boy so aptly pointed out, kids could spend the entire day exercising, if they were outside running around, playing.

While society is realizing that our collective health is deteriorating, instead of encouraging kids to go outside and play (and encouraging parents to let them), the TV (a serious play-killer) tells them that if they want to be skinny, they should get an hour of exercise.

There’s a serious disconnect here. So in keeping with the brave free-range steps recommended in Lenore Skenazy’s Free-Range Kids book (which I’ll post an official review of once I’ve finished reading), I gave the boy an index card to show people when and if they ask what he’s doing out there without an adult, and let him go to the big park near our house. Yes, the same park, less than a mile away, from which he was returning, when I was summoned by the police because he went into a fast food joint asking for water. The same park where he made his first friends in the neighborhood; friends he hasn’t been able to see since the incident.

Naturally, I’m nervous considering what happened last time. But we went over the rules, the Boy asked what time he should come home, gave me a hug and went off to enjoy his chance to play. Instead of giving in to the fear, I can rest assured that my kid will be out running around, instead of sitting in the house playing video games, watching TV and being sold 60 minutes of skinny.