“You don’t need that crap”: How to stop the shopping nag factor 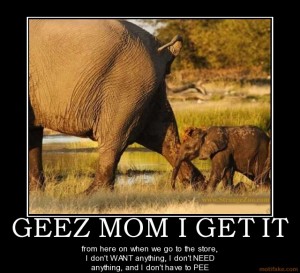 Kids will ask for things when you take them to the store. And they love to touch.

And I don’t budge.

Several years ago the Boy would ask for so many things whenever we went into any store. Mom can you get me this sweater? Mom can I get this hat? Mom can I get this plastic piece of crap toy that I’ll forget about after playing with it for all of a week?

Then I started giving him the speech: I have a list and I’m not getting anything that isn’t on the list. Don’t ask because the answer is no. Anytime he went to ask for something, I’d remind him that I had already answered the question.

Over time, I’ve noticed less asking. When he asks for stuff on the commercials, I laugh and joke about how suseptable he is to advertising. He laughs and jokes that there’s so much COOL STUFF. And then we forget about it.