I’ve been in my new place a little over a week now and slowly, I’m emptying boxes and finding homes for things. Today I unpacked a box of glassware that had been in my mother’s garage for over 10 years. Glassware my grandmother collected and held on to for many years before that and brought back to California with her in 1994.

I’ve been holding on to this box for about a year and would have more if grandma had not promised everyone they could have it. I told mom and sis that I just wanted the martini glasses grandma said she had; a cute mini set she had said was in one of the 3 or 4 boxes of crystal. I dug through several boxes at my mom’s house and found the one marked “Good crystal glasses.”

That box sat in my coat closet in my previous apartment because that’s how long I have been planning to move. But now I am in a place I’m thinking I might settle in for a little while – granted I was in the other place nearly 9 years – and today I decided to unpack the glass.

A set of colored martini glasses with a pitcher. (sorry about the crappy picture, taken with my trusty Blackberry because I cannot get pics off of my actual camera) 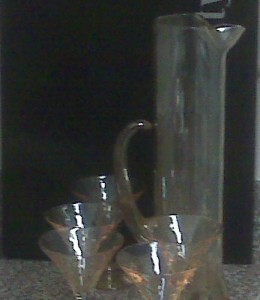 The glasses had been revealed slowly as I removed various glasses from the box. I felt the handle on the pitcher before unwrapping it…I was just hoping for a cute carafe or something. When I pealed back the paper and saw that the pitcher matched the martini glasses, I squealed with glee. I has hoping for a sixth glass, but the pitcher is a great consolation prize.

I guess sometimes it really is worth keeping some things you haven’t used or seen for years. At least 15 years, that box hadn’t been opened and today it was a treasure I unpacked in my new home.