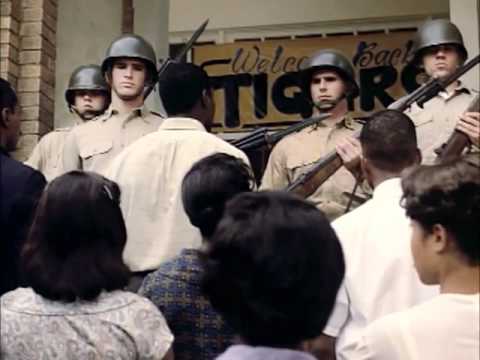 It was Black History Month and after the obligatory unit on American slavery and Martin Luther King, my history teacher decided the final lesson would be a movie about the Little Rock Nine called “The Earnest Green Story.” I’d seen it before and it was one of few movies about the desegregation, so I was excited to watch.

Except that most of the class saw movie day as a day to chatter away. I sat in my seat at the front of the class, craning my neck and trying to tune out the noise until I couldn’t take it anymore.

I raised my hand. “Mr Smith, I’m really trying to watch the movie, could you please ask the class to be quiet?”

“Class please respect your classmates who want to watch the movie.” He didn’t even look up from the papers he was grading so his request was ineffectual and ignored.

“Could you please shut up?” I turned to the girls behind me giggling away. I mean, this was a story about Black American history and they were gaggling about shopping after school. Didn’t they realize how important this was?

Of course, the girls took offense to my use of the phrase “shut up,” my request turned into an argument and I was sent to the back of the room for being disruptive.

I sat in the back of the room fuming. I could barely hear the movie sitting directly in front of the television, now I was all the way in the back and I couldn’t see either. I raised my hand again.

“Mr Smith,” I pipped up after a few minutes and he hadn’t looked up from his papers. “I can’t see back here.”

“That’s it,” he said ripping his glasses off of his face. “Get out.”

“But…” I had never been kicked out of class before and I didn’t really understand what I had done wrong this time. Still, I gathered my things and held back my tears until I was on the other side of the door. I wasn’t sure what to do, so I walked to a resource center to seek council. I was practically hyperventilating with anger and sadness when I stepped into Mrs. Brown’s little trailer. “I just wanted to watch the movie… I told the other girls to shut up… I just wanted him to do his job.”

Then came the call on the walkie: Apparently Mr Smith had reported me as having walked out of class and the attendance guards were to bring me to the office. Mrs. Brown replied that I was with her and that we would be on our way to the office shortly. We arrived and there was Mr. Smith along with one of the girls who had been sitting behind me in class.

After some mediation, Mr Smith offered an impotent apology, saying that he felt as though he had been teamed up on by two black girls. I told him that was not my intent and all I wanted was to watch the movie. Later, when Mrs Brown recommended me for AP History, Mr Smith cited this very incident and rejected the recommendation saying I had a history of disciplinary problems.

It wasn’t until much later that I realized what had really taken place: Mr Smith was a holdover from before the school had been integrated and perhaps the Earnest Green story reminded him of a bygone era at Wilson High School. He was part of the establishment at the school that worked to keep the school segregated with white kids in the honors and AP classes, while students of color, no matter how smart or talented, were placed in remedial classes.

Mr Smith was also one of the swim coaches and because I was on the swim team, we both thought we had an understanding. But what I understand now was that my desire to engage with the Black History lesson, conflicted with his desire to downplay it as much as possible. For a long time I hated him. Now, I am grateful for the lesson and for the revenge of academic success despite his efforts at holding me back.

I am also grateful for people like Earnest Green and the Little Rock Nine, for making it even possible for me to attend integrated schools and have a relatively benign experience of racism. I am grateful that I was never spat on or called the N-word and I had teachers — both black and white — who encouraged me to continue to stand for what I believed and never shrink from my culture, my history or my blackness.