Stay Low, Keep Your Head Up and Keep Your Feet Moving 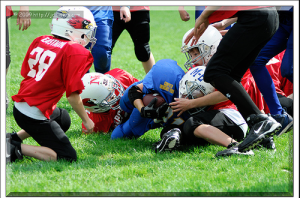 Yesterday they started hitting. I knew it was coming, that’s part of what football is about after all. It’s that fearless willingness to go running full force, into another human being, in the name of the game.

But I’ve never seen the first day. And when the coaches put the boys into three lines with, three experienced players defending the “in zone,” and I heard the sound of helmets crashing together, I winced. Over and over. I thought, “this can’t be normal,” and listened to murmurs from the other moms that they had never seen anything like this before.

I looked around the field and saw the other teams doing various versions of first day contact and I was afraid for my skinny little skater boy. One of the three defenders was going to hit him. My heart raced as he got closer to the front of line and other boys walked away either pumped or looking shocked. Was the boy really ready for this?

The answer quickly became no, when he cried after being hit and was sent to me to get some water. “They crush my rib!” He snatched off his helmet as I assured him his ribs were fine. “No, seriously. I heard it crunch.”

I touched his ribs, poking and watching for signs of pain. Nothing. “You’re fine,” I said. But I wanted to take my baby and go home. Still, I resisted the urge to coo sweet mommy-ness all over him when he said he wanted to go home.

“Just get through practice,” I told him.

“I almost bit my tongue,” he whined. “This mouth guard isn’t working.”

“Tell your coach and ask him what you should do,” I said.

He looked toward the field and pulled his helmet on. “How much longer?”

I was snapping his chin strap. “Yep.”

I pulled his face mask close. “No fear boy.”

He nodded and ran back to the line.

I continued to be concerned through the rest of practice and everyone asked how the boy was doing. He was a little intimidated, I told one dad, who later gave the boy some pointers. Stay low, keep your head up and keep your feet moving.

I went over these three things with the boy later as we did some stretches before bed. I also told him about overhearing the coaches and parents talking about the kids who would give up before the week was over.

“Do you want to be one of those kids?”

“Look at me,” I said. “Are you going to be one of the kids who gives up the first week of contact?”

The boy lifted his chin and looked me in the eye. “No.”

“Alright,” I said. “Now get your stankin’ ass in the shower.”