How I Became a Football Mom 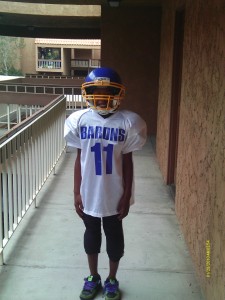 He’s wanted to play for some time now, but I’m not big on kids playing football, nor did I have the money to sink into such a huge commitment. The coach was hearing none of my excuses. He had found my kid in a tree and thought, “hey if he can climb trees and skate, he can probably play ball.”

So he called me and asked if I’d be willing to get the boy to practice the following Monday. I told him I’d do my best and sort of put it out of my mind. That is until the coach called me Monday afternoon to remind me and I had one more excuse: I don’t have a car. But that night the coach got the boy a ride and promised that if I got him to practice, he’d make sure we had a ride home afterward.

And I got him there. I was a little irritated when I discovered that I too would have to attend practice every day (as opposed to just dropping the boy off and going home), but I reminded myself that the boy was playing on sponsorship and that I was doing this for him.

As I watched him train with the other boys, I knew that this would be good for the boy. I knew that this organized play, in a disciplined environment was something that would help me develop the mentality that mediocrity is never good enough. When he looks like he’s hitting a wall, the coach tells him that he’s fine, to push through, that he can do it.

And yesterday when he came crying to me about a cramp in his side, I told him the same thing my coach did: Hands on your head, take deep breaths. I told him that being the best was hard work, to which he responded, “Who said I want to be the best?”

“What the hell do you think you’re doing out here?” I snapped. “Organized sports isn’t really about having fun, Imani, it’s about learning to be the best.”

He took another swig of water and fixed his chin strap.

“If you’re going to do this, you’d better get out there are work your ass off. Do you hear me?”

“Now get back to the line, and give all you’ve got until practice is over.”

And off he went as I looked around wondering if any of the other parents were scoffing at my tough love pep talk. I was relieved to see than none of them seemed to be paying me or my boy any attention. When he ran back to me after practice with a smile on his face, I could tell the pep talk had done the boy well. He had pushed all the way to the end and felt good about his hard work.

Here we are at the end of the second week and all I can say is that I am proud of how hard he works on the field. My baby is growing up, and I am becoming a football mom.