Just a few short months ago I wrote about being lonely and feeling isolated and this week I realized that whatever dark cloud had been following me has lifted…at least for the time being.

I won’t go through a full run-down of everything I’ve been doing lately, I’ll just say that I’ve been tired all week because I’ve been super busy. And not just with work; my social calendar has been full. I was almost wondering what happened that could cause such a change. Maybe it was just me deciding I was tired of being sad and lonely. I started accepting invitations even when I thought I was tired.

Today was awesome. Y’know, some people you work with are just co-workers but I’ve actually become friends with some of the girls I work with. I mean, why not? We’ve been sitting right next to each other for almost a year and while we all started at the same time, we are the survivors of the turmoil that had our department in a stranglehold. After all of the craziness, we actually like to get together outside of work and its becoming more frequent.

So, today I went to San Diego with one of the girls Art Walk at the Bay and a class at Culture Shock Dance Center. The dance class was fantastic; we got sweaty and started our day right with an aerobic workout. I’m sure I’ll be sore tomorrow, but I’m also pretty sure I’m going to sign up for more classes so we can go back again. 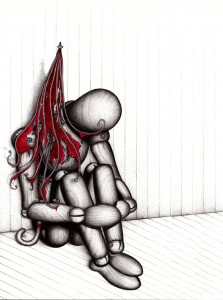 Art walk was alright…Mind you I love the arts, but most of the stuff presented was so…unoriginal. That’s not to say that there weren’t any talented artists, because there certainly were. However, most of what was being shown just looked like I had seen it before. One artist and a friend of the friend with whom I was traveling today, Corey Rice, had quite possibly the most unique paintings and prints at the festival. His work is at once humorous, quirky and surreal. The little guy to the left is one from a multi-frame piece one of which depicted the wooden doll, dancing.

Anyway, I’m tired, but in a great mood because I spent all day in the sun walking around along the bay. It was great; now I’m going to crash.